I purchased two Sick of Beige Bus Pirate v4 from schazamp on the DangerousPrototypes forums a couple of months ago and have been dragging my feet assembling them. I used hand soldering for the SMD parts on my DIY Bus Pirate v3 but for v4, I wanted to try making a solder stencil and reflow using a hot air rework station. There have been several articles recently about etching copper and aluminum stencils and also a recent article about using a Cricut to cut a stencil out of overhead transparencies.

I recently built a Shapeoko and wondered whether it could be used to make solder stencils.

I used the Eagle CAM processor to output the tCream layer as a HPGL file. I then used a GNU hp2xx to convert the HPGL file into SVG. (It took a bit of tweaking to get hp2xx to compile on Mac OS X 10.7.)

will convert the .plt HPGL file into a SVG file which looks like this: 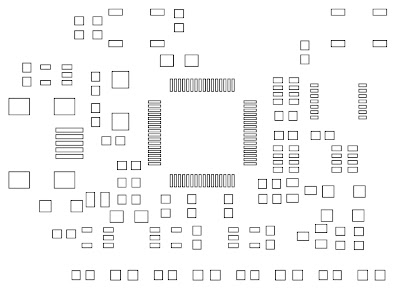 I then used Illustrator to make 0.039" circles to approximate the holes from a #61 size drill bit. I used a red fill and a small stroke to make things easy to see and keep track of but the color and even the size of the hole don't really matter-- only the center coordinates are extracted. I tried approximating the drill hole area to the area of the pad. Big pads were filled with several holes. The small pads on the TQFP chip in the middle were a bit of a challenge. I guess I could have put a drill hole in the center of each pad but ended up with a staggered line of drill holes. The end result looked like this: 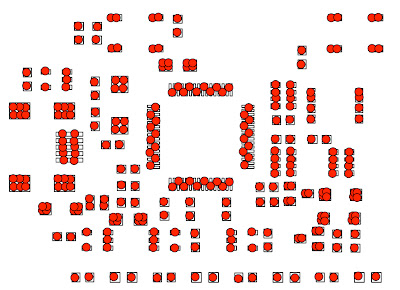 Then came the task of turning the red dots into something I can send to the Shapeoko. I used the python svglib library to read in the modified SVG file and spit out all the circle coordinates. This part was surprisingly easy but kludgy. The SVG file is read into something called a ReportLab format and I had some difficulty figuring out the class/data structure-- if anyone knows of a better/cleaner/more robust way of evaluating/interrogating the report lab object, I would appreciate the help (my python introspection-fu not strong).

All told, 270 holes to drill-- took about 20 minutes (I ended up breaking two drill bits). Might be able to speed things up a bit using a traveling salesman algorithm but the order extracted from the SVG file is not too bad. Here is a link to a video of the Shapeoko in action. And a picture of the completed stencil. 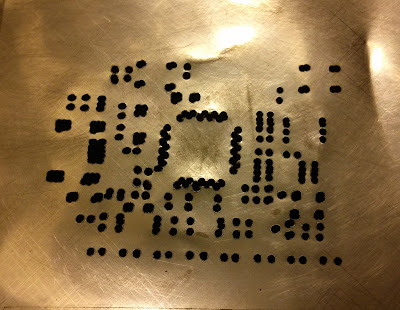 The whole process is surprisingly quick and easy. Drawing the circles is slightly tedious but only took 5 minutes for this small board so not too bad. Some of the pads are a bit wonky-- after the drill bit(s) broke, I rezeroed the Z axis with a new drill bit and ran the gcode again. Some of the holes have actually been drilled three times. Overall the registration between the runs was very good-- the registration between the stencil and the board is quite good. I can't wait to try it out-- I am waiting for delivery of my Mouser order.
Posted by Peter Kim at 2:06 AM