So I finally have my soldering iron driver v1.5 from dangerousprototypes (designed by Arhi, laid out by  Arakis) in a condition that is stable and useable.

A few words of advice for people building this

After the board was fully populated, except for the NTC and the thermocouple amplifier sections, I squeezed everything into a plastic box. The enclosure was actually a container for Korean pepper paste (gochujang). I was impressed with Egor who correctly identified the container from a front/side shot. 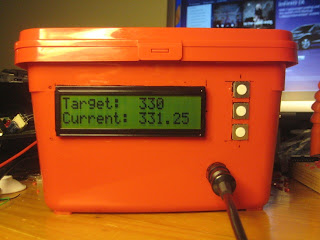 Here is a picture of the top clearly showing its source. 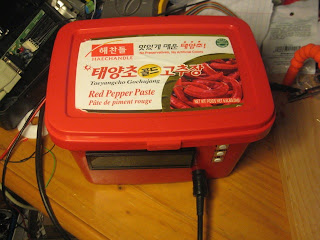 I hooked up buttons for menu, + and -. These were interrupt driven and the switch bounces caused a lot of problems. Arhi wrote a debounce routine but the button presses were limited to 5 per second and there was no autorepeat which made adjusting the temperature a bit tedious.

I rewrote the debounce code and added autorepeat. This made the interface much easier to use. I posted the changes in the forum http://dangerousprototypes.com/forum

Here is a shot of the inside. 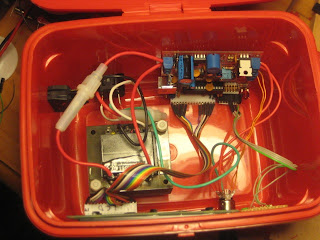 I need to secure the circuit board inside. There is a lot of empty space inside and I am always short on benchtop space. If I am motivated, I might move everything into a smaller enclosure (Korean soybean paste (doenjang) container perhaps). I will have to use a smaller LCD display (8x2 characters) and rewrite the firmware to be more succinct and frugal.

Here is a shot of the completed circuit board. In the second picture, you can see the diode lead art for the bridge rectifier. The capacitor to the right of the diode was a bit big and the diode was squeezed for space. There is another diode standing upright just behind the cap as well. 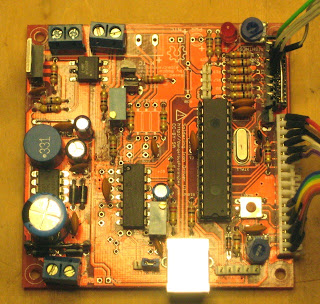 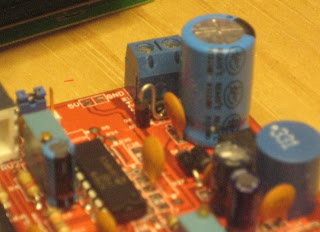 The transformer was salvaged from a lab freezer controller board. It has multiple primary windings for different input voltages and two separate secondary windings. In its current configuration it puts out 20V AC. Even after its been on for an hour, I can't detect a temperature increase above ambient. The triac gets a bit warm, possibly because the input voltage is lower than the expected 24V so I am going to put a heatsink on it.

Addendum: I have received several requests for precompiled binaries. I have uploaded the modified source along with the compiled binaries (with and without bootloader versions) to github. You can get them at

https://github.com/hardwhack/Soldering-iron-driver
Posted by Peter Kim at 10:16 AM